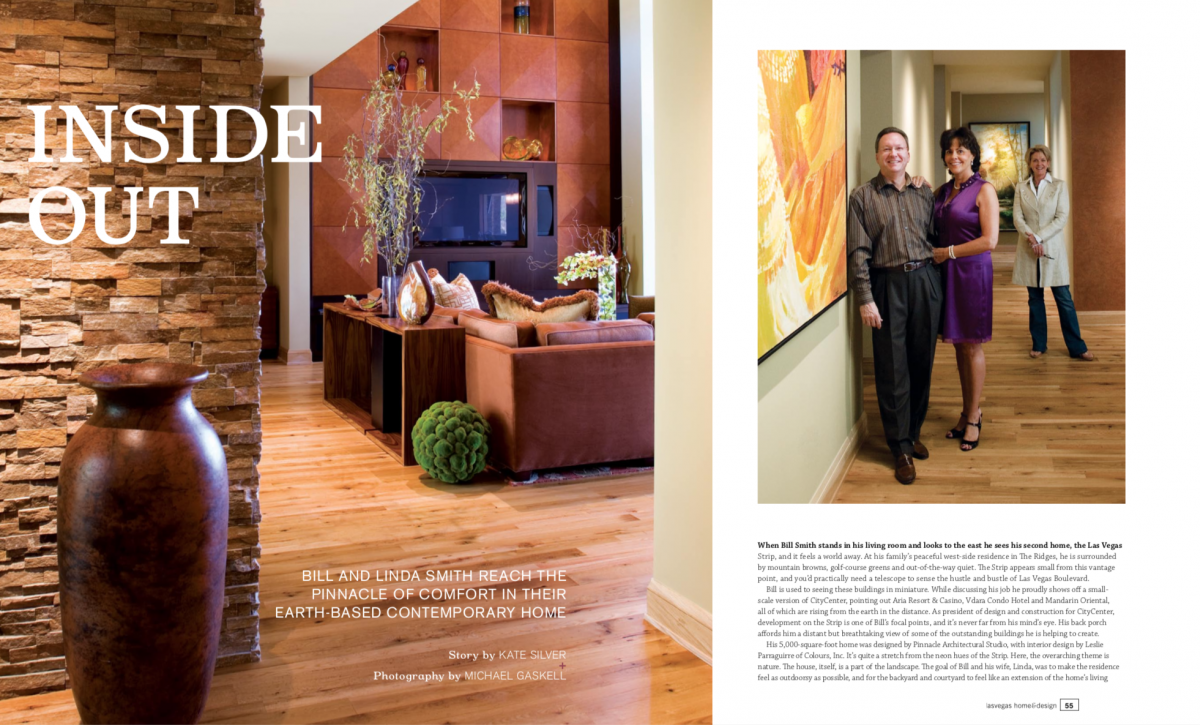 When Bill Smith stands in his living room and looks to the east he sees his second home, the Las Vegas Strip, and it feels a world away. At his family’s peaceful west-side residence in The Ridges, he is surrounded by mountain browns, golf-course greens and out-of-the-way quiet. The Strip appears small from this vantage point, and you’d practically need a telescope to sense the hustle and bustle of Las Vegas Boulevard.

Bill is used to seeing these buildings in miniature. While discussing his job he proudly shows off a small- scale version of CityCenter, pointing out Aria Resort & Casino, Vdara Condo Hotel and Mandarin Oriental, all of which are rising from the earth in the distance. As president of design and construction for CityCenter, development on the Strip is one of Bill’s focal points, and it’s never far from his mind’s eye. His back porch affords him a distant but breathtaking view of some of the outstanding buildings he is helping to create.

His 5,000-square-foot home was designed by Pinnacle Architectural Studio, with interior design by Leslie Parraguirre of Colours, Inc. It’s quite a stretch from the neon hues of the Strip. Here, the overarching theme is nature. The house, itself, is a part of the landscape. The goal of Bill and his wife, Linda, was to make the residence feel as outdoorsy as possible, and for the backyard and courtyard to feel like an extension of the home’s living room. The earthy feel is enveloping, thanks to their use of natural stones and woods and stunning, 18-foot-tall windows.

“From the beginning I felt this organic peace with this house,” says Parraguirre.

“It felt like a fresh break from what I’ve seen in Las Vegas in the 20 years that I’ve had this company. It’s got fresh architecture. Bill wanted to use real stone, real materials, new-growth forests, all the stuff that was reclaimed.”

That organic peace begins before you even reach the threshold. Nature lover that he is, Bill made it a priority to have beautiful trees and blooming plants and flowers, year round. He even traveled to Arizona to purchase 10 grown mesquite and palo verde trees, which were trucked back and planted in the yard. As he looks at his flowers, cacti and trees, Bill becomes more animated, and you can see the passion growing in his eyes.

He motions to a Palo Verde tree that’s centered in front of the stained redwood garage. It looks like the inverse of a weeping willow. “As soon as I saw it I fell in love,” he says. Then he walks up to the gate that stands between the front yard and the courtyard. It’s made of a series of branches that were cast in bronze. Each branch was modeled after a photograph that Bill took of those same Arizona-imported trees.

There’s no lock on the gate, by design, and no handle. You actually have to grab the branches to get in, and feel one with nature. Its quality and style set the tone for the house. “I think [the house] says we love nature,” Bill says. “We have flowers, we have wood, we like the outdoors. And we use materials that relate to that.” Once inside the branched gate visitors get the first unobstructed glimpse of the house. Its combination of desert landscape, rock veneer and wood calls to mind the style of Frank Lloyd Wright. Smith appreciates the comparison, but explains that his overall goal was in self-expression and creation, not imitation.

The front and back walls are made of transparent glass, so the moment you see the front of the house you can also see straight into the living room. The fireplace is the centerpiece. Designed and built by Stefan Gulassa, the logless work of art was created from blackened steel and lined with stones, reaching from the floor to ceiling. Inside, a fireplace grate made up of rows of steel are alight with dozens of flames, and can be cranked up to resemble a raging fire, or turned down so they resemble a romantic series of votive candles floating in the hearth.

Both Bill and Linda consider this the pièce de résistance that defines their home and intentions.

“This whole room is to me probably one of the most exciting parts,” says Bill. “Years ago, in the early 1900s, everything revolved around the fireplace. People ate, cooked, had dinner, and we wanted our fireplace to be a similar experience at our house. So the fireplace became one of the key elements in our design.”

To expand upon the lodge-like feel, the floors and ceilings are lined in reclaimed wood. The colorful living room and kitchen walls, made by Ébéniste, consist of distinctive burl peachwood, mahogany and wenge wood. The other walls around the house are made of natural stones stacked tightly on top of one another, so tightly that there’s no grout between them, and the result is puzzle-like in its naturalness.

The same kind of stone veneer lines the outside of the angular home, creating a consistent flow from the inside out. That’s exactly the intent.

“We treated the backyard like an exterior living room. That’s why we created all these different levels. We wanted this to be an extension of our house. That’s why the back of the house is all glass. So when you stand there you feel like you’re outside, in the courtyard or the backyard,” says Bill, as his eyes sweep across the outdoor space, taking in the pool, Bear’s Best golf course and the mountains.

A dark-bottomed spa trickles on the first level of the yard into the pool, which is on the second level, giving the illusion of a pond and its waterfall. The deck and the pool copings are made of New York slate, and the pool is level with its surroundings. A few steps down, to the left, is a sitting area with a firepit, which was also built by Stefan Gulassa, and is operated by remote control. The cushy chairs are angled toward the view of the Strip, and you get the feeling that more than a few business decisions were made right here.

Purple Texas rangers, yellow lantana, orange Mexican birds of paradise and pink bougainvillea grow wildly around the yard, framing a path that leads in front of the pool to yet another nook, this one bearing a firepit surrounded by circular couches.

“We wanted the whole experience through the house to be something you didn’t expect. You’d never know this pit’s here when you come outside,” says Bill. “Once you come out, you see there’s more and you say, ‘Wow, I didn’t realize this was here.’”

It worked. There are surprises around every corner. Up the stairs is an outdoor kitchen with a granite table for entertaining. Nearby, a circular stairway climbs the side of the house to the roof, where a flat deck faces west, making it perfect for sunset gazing.

It also enables Bill to look towards the mountains, away from his Las Vegas Boulevard office, so he can fully embrace the nature that surrounds his other world. 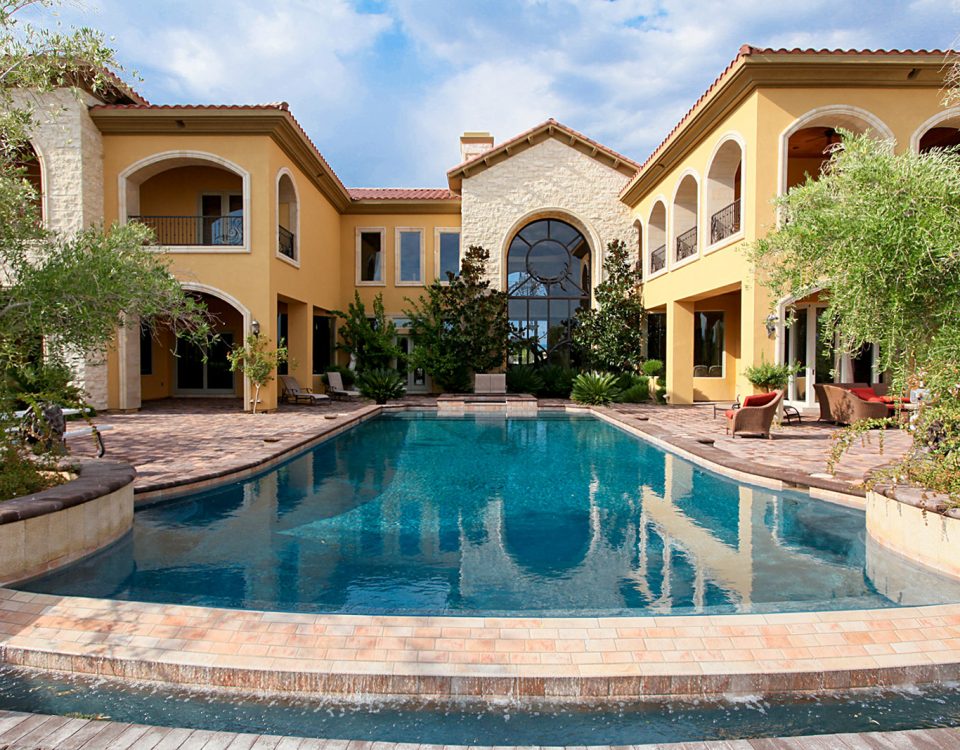 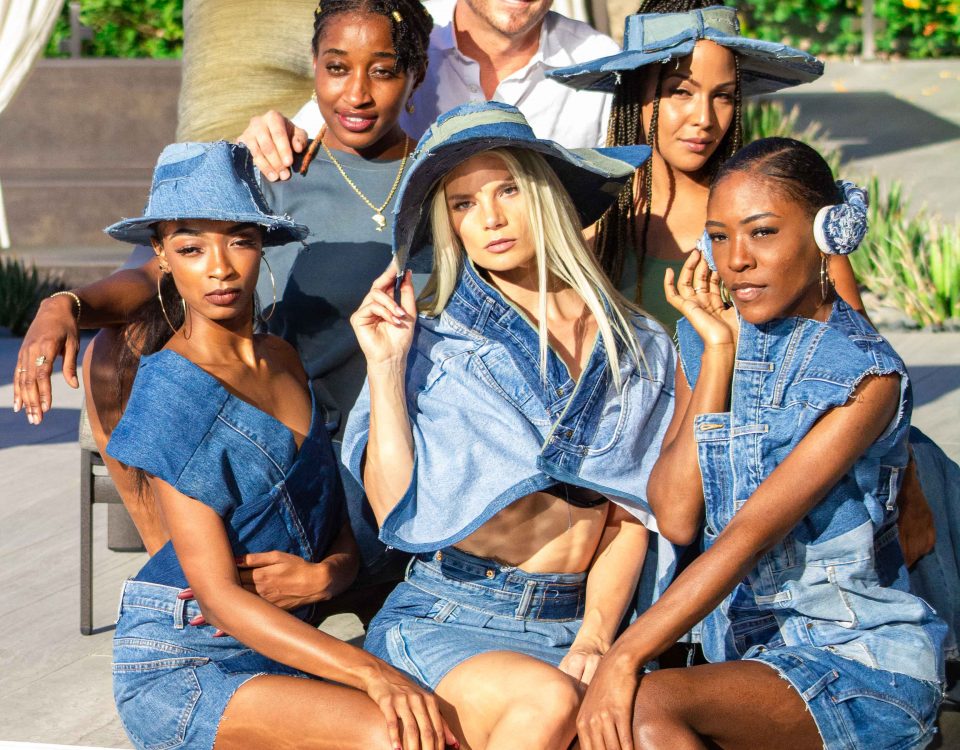